A Community Land Trust is Born

Land in Common humbly emerged from a few people looking for affordable housing in a rural area where they could tend a garden, pursue activism, and be rooted in community. It then grew into a collective of social justice activists and organizers who homesteaded alongside elder landowners Naomi and Jim Nesbitt in Greene, Maine. The homestead came to be known as the Justice, Ecology, and Democracy Collective (JED Collective), a community stewarding land and living cooperatively.

For over twenty years, JED Collective, recently renamed Wild Mountain Cooperative, existed as a loosely organized, land-based project with volunteers and supporters sharing political alignment. Its work was grounded in creating an accessible community for a diverse group of people to connect with land. Barriers to land access were low—there was no buy-in fee for membership in the Collective. To this day, there is no individual ownership of land. Today, Wild Mountain Cooperative exists as a subsistence and medicine farm, a gathering place for transformative teaching and learning, a wild lands sanctuary, and a cooperative living community.

In its infancy, JED Collective members organized visits to the World Social Forum and communities of Brazil’s Landless Worker’s Movement. Experiencing a movement building land-based communities and cooperatives linked through a solidarity economy inspired members to organize subsequent meetings in Maine to vision a land justice movement at home. Similar to Brazil, land ownership in Maine is very unequal. Nearly 44% of Maine’s land, for example, is owned by a small group of multinational corporations, billionaires, and investment companies. And though comprehensive statistics on Maine land ownership are not collected, it is clear that many Maine people–particularly low-income people and people of color–lack access to sufficient land on which to farm commercially or for subsistence.

Inspired by the civil rights work of Shirley and Charles Sherrod, Bob Swann, Slater King, and others who organized New Communities, Inc, as well as the Kibbutz cooperative movement, and the Indian Gramdan (“land gift”) movement, Wild Mountain Cooperative’s state-wide vision for land reform became clear. The Community Land Trust model offered a structure for community land ownership and secure tenure for those who would otherwise not have land access for living in agrarian community for subsistence or production agriculture.

Ten years ago, and a few years after visits to Brazil, JED Collective organized to purchase its leased land from the Nesbitts. First, it created the Clark Mountain Community Land Trust (CMCLT), a 501(c)(3) nonprofit. After purchasing the land, CMCLT then entered into a 99-year rolling ground lease with Wild Mountain Cooperative (JED renamed at this point). Both entities worked together to enable a community financing structure. This financing doesn’t bind the land as collateral, but instead uses a model of social trust, backed by an enforceable contract. Wild Mountain’s networks of relationships enabled finding people who could be community financers, and the Community Land Trust supported the financing design. The CLT offered financers various lengths of loans, and lenders decided their own interest rate. They have found when a balloon payment becomes due, some lenders will forgive the loan, resulting in significant donations to the 501(c)(3) community land trust.

“It took young, really stubborn, and really naïve people to stick with JED and Wild Mountain Cooperative for all these years of gardening, orchard planting, and making improvements to buildings without knowing if we had secure land tenure. It was at least 5 years of negotiating to get to the point to be able to buy our first plot of land. The Nesbitts, especially Naomi, have been huge allies and clear in the shared vision.” – Ethan Miller, Land in Common

Given Wild Mountain Cooperative’s initial commitment to tackle the challenges of unequal land access, it needed to create an organization that could cooperatively hold land. Not all the landless could live at Wild Mountain, so it was necessary to shift some focus to the broader movement to secure other parcels of land so that the wider community could access land. Signifying its launch into a state-wide phase, CMCLT changed its name to Land in Common in 2017.

As so many fruitful projects begin, Land in Common’s vision evolved from its day-to-day practice. Land in Common need not “live into” its work in the future—it has already built a depth of experience and skill through decades of conservation, community-building, organizing, experimenting, and learning. This work has not been without struggle, however. Land in Common was started with all volunteer labor over a long period of time, requiring a lot of patience to build. Resourcing has been challenging because Land in Common is not a conventional or narrow model, as some conservation land trusts are. Instead, Land in Common works as a Community Land Trust focused on both farmland and wild land, as well as land justice.

At its center, Land in Common is committed to work that expands who can access a meaningful life in connection to land and community. Its ability to endure and simultaneously evolve its mission is remarkable, and is attributable to both a core group of people committed to it for its duration, holding its vision, as well as commitment to the land itself.  With firsthand experience of the multifaceted aspects of land sharing, Land in Common is primed to expand to a state-wide scale to enact its bigger vision.

Learn more about Land in Common’s work to date.

“We were a group of people who were very patient with each other doing this volunteer work together over a long time. We held a deep connection to the land and committed ourselves to it. Every commons needs commoners—a community of people clearly accountable to that land and for that land. When things got hard, there was more at stake because of this land commitment, as well as a deep obligation to the elders Jim and Naomi.” – Ethan Miller, Land in Common

Building from Radical Roots to Enact the Community Land Trust

Pursuing a Community Land Trust as the structure for Land in Common also accomplishes something deeper regarding Mainers’ relationship to land—Land in Common removes land from the commodity market, out of the world of private property, where land cannot be traded for profit. In turn, Land in Common creates a “multi-generational land base for sustainable livelihoods that supports communities working for just, cooperative, and resilient futures.” Its work forces us to re-think our relationship with land at a fundamental level.

Specifically, Land in Common “seeks the re-integration of humans with more-than-human communities; the reparation and healing of injustices that have separated people from the land and privatized it for exclusive use and exploitation by a privileged minority; the cultivation of just and resilient forms of livelihood; and the creation and re-vitalization of resilient, inclusive cultures and communities of care, cooperation, and solidarity.” Land in Common programs will increasingly focus on land reparations, supporting a popular education curriculum, community financing, and homestead legacy program.

Land in Common is a Community Land Trust with a two-part board consisting of resident and associate members. Associate members are people in the wider community who don’t live on Land in Common land, but support its vision and mission. Its land is leased through a 99-year, rolling ground lease to organizations complementing its mission of land stewardship and justice work. In the lease, housing and improvements are held to a lower resale value—they can only be sold at replacement value or at an amount affordable for people with low or moderate income. This model effectively severs land from market value, and significantly reduces the capture of infrastructure and housing by market value, in turn maximizing affordability for the next generation. Of course, depending on the lessee-farmers or lessee-organization, this resale formula may change, especially when considering the hard question of housing equity as a source of wealth accumulation.

Land in Common aims for land to never be tied up in debt, so that land cannot be leveraged as a commodity, even if it isn’t sold. It plans to replicate its successful community financing model for future land acquisitions. Both a community land trust and a group supporting a local commons are needed to enable both securing community financers and designing the financing vehicle.

By transforming the relationship between people and the land, Land in Common’s work is part of a wider movement for liberation and transformation. Land in Common’s commitment to organizing and ensuring community control of land hearkens to the spirit of the Community Land Trust model as conceived by Shirley and Charles Sherrod, Bob Swann, Slater King, and others who organized New Communities, Inc. They have not abandoned their radical roots, and in turn offer us a practical, meaningful, and powerful path forward for another way of living.

The work of Land in Common and Wild Mountain Cooperative is an inspiration to us at Agrarian Trust. Their models and the complex issues they’ve grappled with are ones we can learn from as we support Agrarian Commons throughout the U.S. Together, we endeavor to support a learning community of commoners to re-think land—building a broader movement for land justice and supporting diverse, land-based commons and livelihoods. Check out our Agrarian Commons Creation Committee notes and shared documents (coming winter 2020!) and Land in Common’s Study Circles. Stay tuned for a broad collective alliance coming together by 2021.

Over time as we each grow to support commons projects, we can enable a solidarity economy and diverse alliances among them. Agrarian Trust looks forward to learning from Land in Common’s tactics as its land becomes a base for building solidarity economy relationships, such as through sliding-scale loan repayments.

Important questions that we share with Land in Common include:

·      How do we devise an appropriate structure to decide who gets to live on land trust commons land? What is the process for supporting land access and livelihoods for people when there is no clear group connected to a parcel of land?

·      Leadership at both of our organizations is majority white, which is linked to the fact that 98% of farmland owners are white. How do we create an inclusive environment and support diverse leadership, including on our board of directors, in an authentic way? How can we support those without the resources to be involved, and ensure opportunities for varying capacities? How do we ensure diverse community engagement, from the beginning, for each project?

·      How do we at Agrarian Trust support a diversity of mission-based, land-based, good work, in addition to regenerative production farming? How do we ensure fair and equitable expectations for stewarding land in a diversity of contexts and with varied (albeit related) goals? How do we support subsistence farming Agrarian Commons, or even non-farming residences living on Agrarian Commons farms?

In the wise words of the folks at Land in Common: “We recognize that we are at the beginning of our journey of putting our values into practice, and we welcome all input about how best to proceed.” 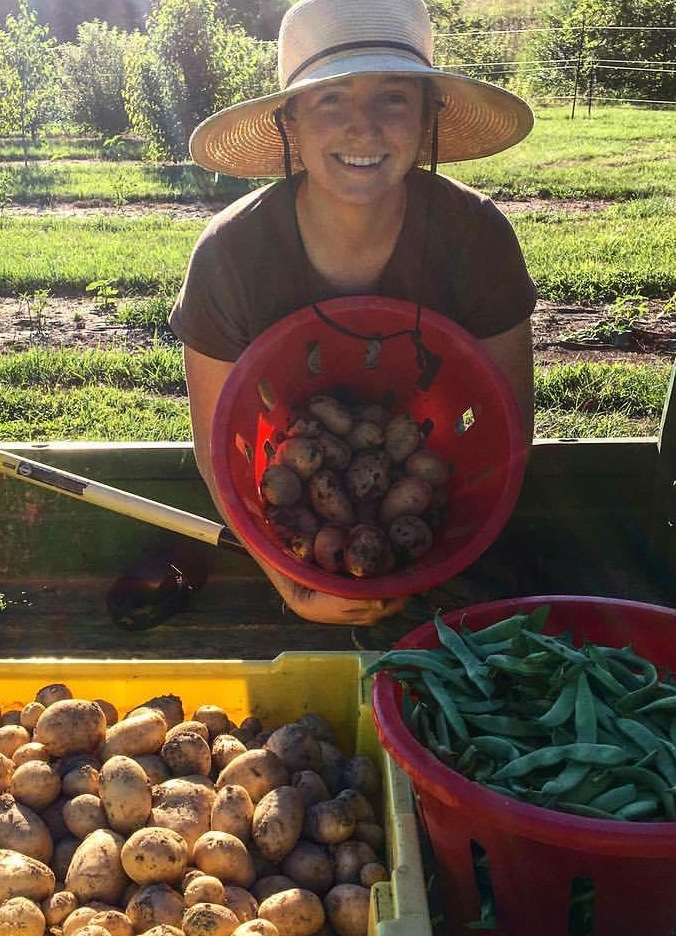 Post Author Eliza’s work is to support land-based livelihoods, healthy farms, de-commodifying land, and legal tools for equitable land access and shared stewardship. As a farmer, acupuncturist, and Agrarian Trust team member, her life centers on nurturing and healing with the land and human communities that depend on it.